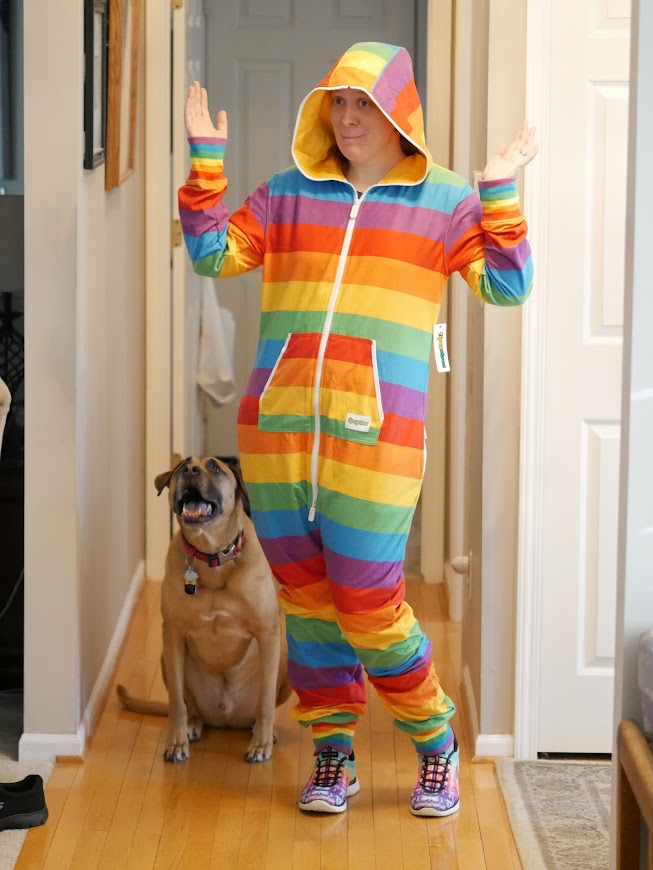 After 6 months of having various medical issues and not knowing why, I was diagnosed with a heart condition (nbd :D) and I have back surgery scheduled for the end of September, with up to a 1 year recovery time. I’ll be online shortly after I’m sure, but won’t be doing any public speaking (virtually or in-person) for the foreseeable future. I appreciate all of the support from family and friends during my time trying to figure out WTF was wrong with me 😀 Please get vaccinated if you haven’t already, and wear a mask indoors, to keep the spread of COVID down so I can get my surgery on time!!!

Since the beginning of the pandemic, I’ve been working out regularly – up to 6 times per week. I was doing HIIT workouts, but had an injury after going for a run or two, so had to take a break from that intensity, and started PT. I was still exercising often, using the stationary bike with the Peloton app, as well as doing strength training and using VR and Ring Fit Adventure to augment my exercise routine. I was seeing my two physical therapists twice a week.

In February of 2021, I finally got my Peloton Bike+ I had ordered back in November, and coinciding with that, I started to have stabbing pains and random numbness in my feet and legs. I also started to have strange heart flutters, shortness of breath going up even a single flight of stairs, and extreme fatigue. I worked on it with my PTs but there was enough concern to bring it to a doctor.

I made a virtual appointment, and had a great first visit with a nurse practitioner. She listened to all of my concerns, and ordered a bunch of tests so we could start ruling things out. I got a blood panel, X-Rays of my foot, and ultrasounds of my leg veins and arteries. We started a medication for the neuropathic pain, which we soon stopped because of side-effects; tried another one, but stopped that because it did nothing but cause me constipation, and the third one (Cymbalta) I’m still on. It helps, but doesn’t cover my pain or numbness 100%.

All test results came back normal (you’ll get used to this line!).

By this time, I was having near constant pain in my lower back, and having trouble walking sometimes with my knees or ankles randomly giving out. I bought a cane to use while walking. I also noticed that about a 30 minute walk was all I could handle before my feet felt like they were on fire – pins and needles, or walking on hot thumbtacks. I was no longer exercising at all. I just got my Peloton!!! I rode it I think 4 times…

So I took a Covid test to make sure I was negative (I was) before going into the doctor’s office for more tests. They did an ECG, and tested for Lyme Disease, Mono, and a bunch of vitamins to make sure this wasn’t some strange deficiency. After the ECG they ordered a Holter monitor and an ultrasound of my heart, as well as an MRI for my back.

The Holter monitor results were concerning, and I was referred to a cardiologist. Before my appointment, I did some googling from the results, and found a few things saying alcohol was not the best thing for one of the several possible things going on with my heart, so I stopped drinking. Up to that point, I was drinking every day, using it as a crutch to not deal with shit. I already quit caffeine a few years ago for another medical condition.

The cardiologist diagnosed me with Premature Atrial Contractions, basically extra heartbeats. By the time I got to the cardiologist, the heart issue was mostly gone (cuz of not drinking!). He prescribed me a medication to try (which I was allergic to lol so only took once), and we decided since it was in a good spot without alcohol, we wouldn’t treat it and just check in next year.

The MRI came back concerning, so I was referred to a neurosurgeon. He would only do a virtual visit, and in about 10 minutes told me I needed to have surgery, explained everything about it like a medication commercial, and said he’d have someone call to schedule it and it was over.

I was shocked to say the least. I found I had written down “hospital 2-3 days” and that’s it. I didn’t even catch what the name of the surgery was!

I obviously looked for a second opinion, and in the meantime was referred to a rheumatologist to look into my fatigue. Up to 3 naps per day is generally not conducive to productivity etc. They ran a TON of tests, referred me to a dermatologist to look into something (which was benign), and we tried some meds to see if they helped. Everything came back as normal. “Nothing remarkable”. “We looked at everything, there’s nothing else we can do – your issue is not rheumatological”. So at least we checked that off the list. We had a theory that my fatigue may be tied directly to my pain, and if my pain was gone it might help my fatigue.

I now had my second opinion – a physiatrist, via a service called 2nd.MD. This was another virtual visit. After about an hour, he said I did NOT need surgery, I needed more physical therapy…

So I met with one of my three physical therapists to get his opinion – technically the third opinion on if I should get surgery. As my physical therapist, he disagreed that I needed more physical therapy – he said that’s ridiculous, I was getting plenty of PT that wasn’t helping, and more wouldn’t help either. He also mentioned the possibility of injections helping (the first time anyone mentioned that), and to look into them.

I sought a fourth opinion – this time from an orthopaedic surgeon, and in person. He reviewed my MRI with me, took some XRays, and detailed the type of surgery I might need. He also referred me to a pain management specialist to see if injections would help, before we scheduled surgery. Finally I felt like I was getting somewhere!

On to the pain management specialist! I was optimistic but cautious with my hope. First we tried an epidural steroid. With these injections, if you experience pain relief for 3-6 months, you may be able to avoid surgery. So I could potentially get some pain relief, and also help determine if I really do need surgery.

That, unfortunately, did nothing for me – not even a bit of relief from the anesthetic, which they expect at least a little relief from. Next visit, we took a different tactic – perhaps it was something with the facet joints. If this worked, I could try another surgery-free option. So we tried anesthetic injections in several of those along the left side, and I kept a pain journal for 8 hours.

Again, unfortunately, not much improvement for me. Next visit, we went for the last-ditch option.

This time, we tried another epidural steroid, but from the side. I actually felt the steroid going in this time, which was promising. And after a day or so (after some fun steroid-induced insomnia!) I finally experienced some relief! About 80% pain relief, for like 2 days, as well as relief from my extreme fatigue. Obviously, if it had lasted longer that would have been best, but it was really nice while it lasted 😀 But it was good to see that the fatigue is in fact directly tied to my pain, and not some other issue.

At my last appointment, they told me that unfortunately there was nothing else we could try, and surgery was my only option.

So here I am, scheduled for surgery (it’s a PLIF if you want to look it up :D) at the end of September. It will be 4-6 weeks out of work, and up to a year until I am fully recovered and able to do “normal” activities again. I’ll get to set off metal detectors for the rest of my life, yay!

Here’s where you come in – I can’t get the surgery if elective surgeries are suspended due to COVID. That means my pain and fatigue are extended indefinitely. Please, wear a mask, get vaccinated, anything you can do to keep COVID down. I would really appreciate being able to get this surgery as scheduled! You can send healing vibes, too, if you like, but it’s more important to stop the spread of COVID!

I’m Hilary Weaver-Robb, also known as g33klady on the Internets. I’m a Senior Quality Engineer working remotely near Detroit, I tweet a lot (@g33klady), and swear a lot, too.